Armpit Fat Causes & How to Get Rid of Armpit Fat 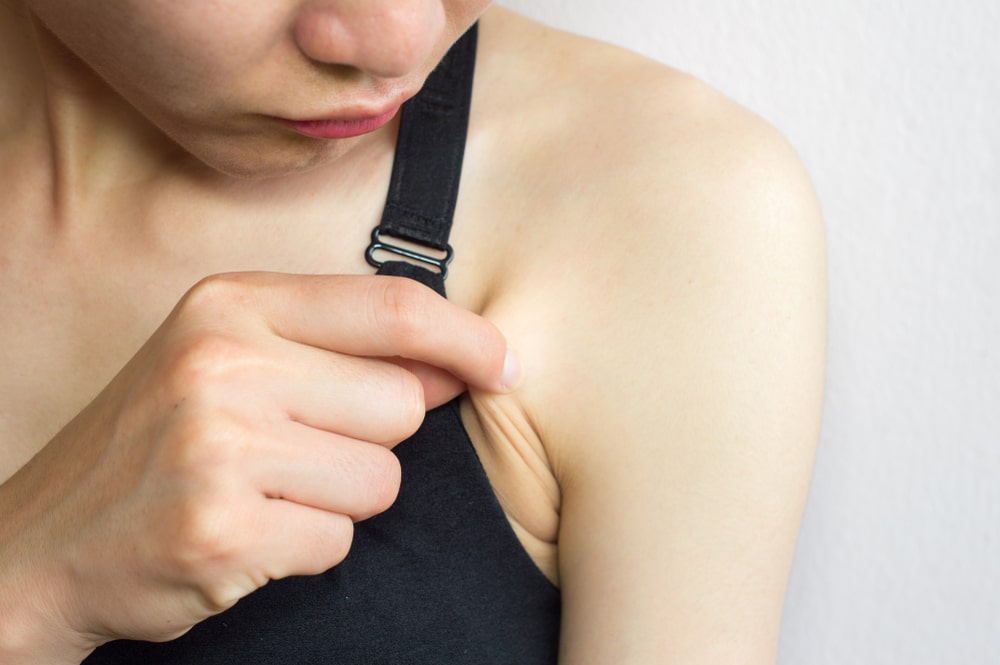 Nobody wants to have unsightly armpit fat dragging them down aesthetically. However, this is a problem with which many contend. The question then is what to do about armpit fat, and are there ways to get rid of it? Fortunately, there are several methods to get rid of unwanted armpit fat that you can utilize. We will go over the mechanisms of losing armpit fat, some of the methods used, and the benefits and shortcomings of these methods.

The Mechanisms of Losing Armpit Fat

The single most reliable way to lose body fat is through diet and exercise. This method involves making changes to your eating habits and activity levels throughout the day in order to facilitate weight loss. The best way to lose body fat through dietary adjustments is to be in a negative energy balance. This simply means being in a caloric deficit or eating fewer calories than you expend.

Your body naturally burns calories (a calorie is a unit of energy) throughout the day just by powering your various organs and bodily functions. You can calculate your total daily energy expenditure (TDEE) caloric requirements using your height, weight, and activity level on an online calorie calculator. If you eat fewer calories than your TDEE, you will lose body fat. It’s that simple! If you eat in a caloric deficit, you will naturally lose body fat until, eventually, your armpit fat disappears.

Many people have an unhealthy mental relationship with food that causes their weight gain. People with this issue react to various emotions, such as boredom, sadness, and happiness, with food. Furthermore, these individuals comfort or reward themselves with food. Counseling can help you address the root cause of your overeating, and it can allow you to remedy these issues effectively. Psychological counseling is one of the many tools in your weight loss arsenal.

This makes weight loss through caloric restriction easier because you are not as hungry. This is an ideal solution if your eating issue is not purely psychological. However, you will still have to reduce your overall caloric intake to below your TDEE in order to lose body fat, even with these medications. GLP-1 agonists are among the newest, most innovative, and most successful weight loss tools we have available, and they may be right for you. They require a doctor’s prescription, so you will need to see your doctor in order to be prescribed them.

This is a cosmetic intervention to cause specific localized fat loss in an individual using extreme cold. Also called fat freezing, cryolipolysis involves the use of freezing temperatures to destroy fat cells in the targeted area. This is typically performed as an outpatient procedure in a doctor’s office or hospital. The area to be treated is placed in a kind of clamp, and the clamp is cooled to extremely cold temperatures, killing the fat cells in the region but leaving the skin cells intact.

This is used to selectively lose body fat in a specific area, such as the armpits. However, cryolipolysis carries with it some potential unwanted side effects. For example, paradoxical adipose hyperplasia is a potential side effect of cryolipolysis in which the fat cells in the area multiply instead of reducing. Due to the risk of this condition, you may be better advised to consider radiofrequency lipolysis or laser lipolysis, which do not carry this unfortunate risk.

This is a procedure in which chemicals are injected into the body in order to destroy fat deposits. First, the patient is prepared for this procedure, and the area to be treated is marked off. Then a substance called deoxycholate or phosphatidylcholine, or a mixture of the two is injected into the body fat on the chosen area subcutaneously (under the skin). Deoxycholate or phosphatidylcholine is a lipolytic agent or a chemical that causes fat cell disruption and eventually death.

This ultimately results in a reduction in body fat in the area chosen for treatment. Unfortunately, this procedure does have some relatively severe side effects that come with it. Common side effects include discoloration of the skin, scarring, and knots forming under the skin in the treated area. Additionally, the American Society of Plastic Surgeons (ASPS) has advised against the use of injection lipolysis procedures in the past.

In this cosmetic intervention, radio waves are used to heat fat deposits in the body, destroying them. The process is similar to other types of cosmetic procedures in that the patient is prepared, and the area to be treated is marked off. Then a device is placed about a centimeter from the body and using it. Radio waves are then fired into the area to be treated. The radio waves pass through the skin cells harmlessly, but they heat up the body fat in the treated area to high temperatures, and this destroys the fat deposit.

Generally, a device that cools the skin in the treated area is used to keep the patient comfortable during the procedure. This cosmetic solution is permanent, as the fat cells are dead afterward. However, like with all cosmetic procedures, you will have to make an effort to maintain the results achieved by the procedure, or you will just gain the fat back. There are relatively few side effects with this procedure, and those that do exist are fairly minor. The most common side effects of this procedure are redness and tenderness in the affected area.

If you want to lose that unsightly armpit fat, you should contact Emerald Laser for the latest in laser lipolysis technology. Find a provider near you!