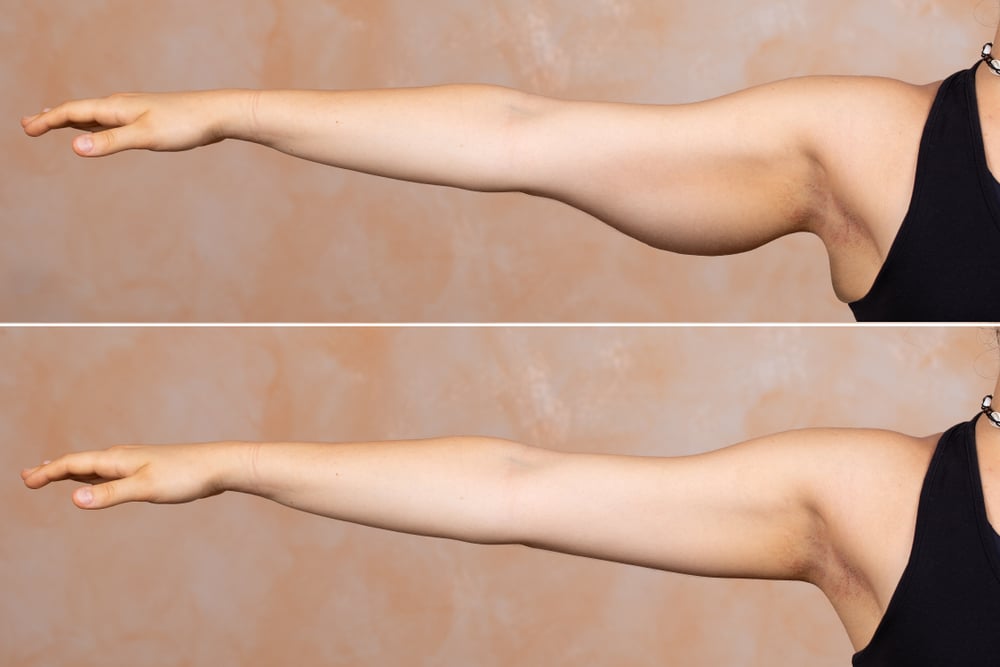 For some individuals, getting rid of arm fat can be extraordinarily challenging. They either have a poor diet, don’t exercise their arms sufficiently, or are predisposed to arm fat due to genetics. Arm fat can manifest itself in different ways, and one of the more common types of arm fat is referred to as “bat wings.” Emerald Laser will show you healthy, non-surgical alternatives for getting rid of bat wings and other types of arm fat.

What Are Bat Wings? Why Do You Gain Weight on Your Arms?

The term bat wings refers to a specific type of arm fat. This is the part of the skin around the tricep that hangs down when an individual with excessive arm fat holds their arms out to the side.

There are several reasons why you may have acquired bat wings. Here are some of the most common ones.

If you have a diet that involves the intake of excessive calories or carbohydrates, you are likely to gain weight. Some of the excess fat is bound to accumulate under your arms, causing bat wings.

Lack of Exercise or Improper Exercise

Like so many muscles in the body, when you don’t exercise your arms, they become soft and flabby as the muscles weaken and fat accumulates in and around the muscles.

As you get older, the skin on your body and face becomes looser as it loses the collagen that causes elasticity. This doesn’t only occur in older people, but it is much more prevalent with aging adults.

Some traits are hereditary, and there is significant scientific evidence to show that the places we accumulate fat are among those features handed down through our ancestral train. If your parents or grandparents have pronounced bat-wing fat under their arms, you may be fighting an uphill battle.

Regardless of why you have bat-wing fat, there are several healthy ways to lose this unattractive feature.

Arm fat can result from an unhealthy lifestyle, and one of the most effective ways to reverse the condition is by embracing healthy habits.

At Emerald Laser, we recommend a calorie-neutral diet to maintain weight and reduce body fat. Nutrition and exercise are the two most significant factors in achieving a calorie-neutral or calorie-negative lifestyle. The way to achieve a calorie-neutral diet is by multiplying your body weight in pounds by 15 to calculate your daily allowance. For individuals trying to lose weight or with slower metabolisms, they may need to use a lower multiplier, like 13 or 14.

In addition to exercising to burn calories, resistance exercises can tighten up the muscles under the fat and skin in your arms. Body-weight exercises that work the tricep area are particularly effective for this: pushups, dips, reverse dips, etc.

It’s difficult to determine the level of success that you can achieve through nutrition and exercise until after a period of weeks or months of continuously adhering to a regimen. For many, the results are disappointing. This is often because arm fat can be particularly stubborn. Even if you lose a substantial amount of weight, you may still have bat wings. Laser fat reduction — often referred to as laser lipolysis — offers a non-invasive, non-surgical technique to remove fat from the back of the arms.

Laser lipolysis is a technique that was popularized some time ago as a healthy and safer alternative to liposuction and other surgical procedures. With laser lipo, the technician targets fat cells beneath the skin with a laser. The laser penetrates down to the fat cells and bores a hole in the cell wall while simultaneously emulsifying or melting the lipids contained by the cell. Once the fat is liquified, it seeps through the pores created by the laser, where it is disposed of naturally by the body’s lymphatic system.

Benefits to Laser and the Downside to an Arm Lift

Brachioplasty, often referred to as “arm lift surgery,” is an invasive surgical procedure that involves removing fat, cutting away loose skin, and then closing the incision. The surgery requires the use of anesthesia and requires several weeks of recovery time. The disadvantages of arm fat removal surgery include:

It’s important to note that none of these items are true of laser lipolysis at Emerald Laser. Emerald Laser is a fast, painless, non-invasive procedure that does not require anesthesia or downtime. Depending on the area of treatment, Emerald Laser providers usually charge between $1,500 and $2,500 for a package of six sessions. Call today to speak to a medical professional.

If you’re trying to find out how to get rid of flabby arms, and you’re considering laser arm fat removal, it might help to review these frequently asked questions.

Why Can’t I Just Lose Weight to Get Rid of My Batwings?

Weight loss is sometimes effective in reducing overall body fat, including the fat behind the arms, but for some individuals, it’s just not enough to overcome their physical and genetic disadvantages.

Emerald Laser allows the fat to drain from the cells without killing them, which is considered advantageous. When fat cells are destroyed, they are no longer available should you regain lost weight. That could lead to fat accumulating in other areas, including near vital organs.

How to Lose Arm Fat Effectively With Emerald Laser

Emerald Laser offers a safe, effective way to get rid of your bat wings. If you have been frustrated with the results you’ve been getting from diet and exercise, schedule your initial consultation with an Emerald Laser provider.